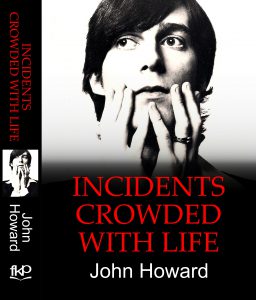 John Howard was a good Catholic boy brought up in a post-war Lancashire, who became more turned on by gilt than by guilt. Sacred Heart statues and a wall-mounted crucifix, along with plans for priesthood, were replaced by Marc Bolan posters, miming to ‘Metal Guru’ in a full-length mirror and dreams of pop stardom.

As Glam Rock stomped into millions of teenage bedrooms, John left home for London, and was quickly signed to CBS Records, making his debut album at Abbey Road studios, and enjoying the fruits of a fully gay-liberated city.

In parallel with an often tempestuous private life – attacked with a knife by his first lover, narrowly escaping being gang-raped in Malta, and rescued from being abducted by a serial killer cab driver in New York – were the career highs: appearing on TV and rubbing shoulders with pop superstars like Johnny Mathis and David Essex, writing and recording the theme song for the William Holden/Peter Fonda movie, Open Season, and launching his album with a concert at The Purcell Room on the South Bank.

John was seemingly bound for fame. But fate had a different idea.

Everything came to a dramatic halt when, at the age of twenty-three, he broke his back jumping from his apartment window to escape his flatmates’ sex attacker.

A potentially glittering career, and an often perilous sex life, were all put on hold as John lay in a hospital bed unsure if he would walk again.

Buy from Amazon Buy from Hive 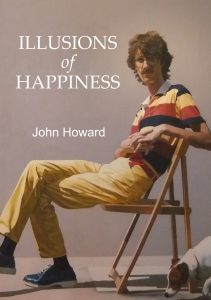 Incidents Crowded With Life, part one of singer-songwriter John Howard’s autobiography, published by Fisher King in 2018, saw the ambitious Kid In A Big World leave his Lancashire home for London as Glam Rock ruled the airwaves. In 1975 he reached the almost-dizzy heights of pop stardom with the release of his much-heralded debut L.P., recorded at Abbey Road and Apple Studios and released by CBS Records.

He also discovered and partook fully of the joys of London’s rampant gay scene.

It all came to a crashing halt when, in the Autumn of 1976, John broke his back when he jumped from his bedroom window to get help for his flatmates, whose ‘bit of rough’ had turned much rougher. John now faced an uncertain future and months of recuperation in hospital…

Illusions of Happiness picks up the story as John recovers from his injuries and returns to performing and recording. On this often turbulent journey back, he is heckled by The Sex Pistols, negotiates a tricky Criminal Injuries Compensation case, has his portrait hung in The National Portrait Gallery and makes a series of singles with Trevor Horn (Frankie Goes To Hollywood) and Steve Levine (Culture Club), along the way being briefly managed by Tom Watkins (Pet Shop Boys, Bros) and re-signing with CBS.

The flame of ambition, having been extinguished once before, briefly flickers – but life is busy making other plans. Offered the chance to move to ‘the other side of the music business desk’, John seizes the chance and begins a fruitful new career in A & R, “when I finally began to take hold of my own destiny”.

The book – and this to-be-continued story – ends in 1986; John has a new career, a new apartment and exciting new prospects. The future’s looking bright. But, hovering over the horizon like a gathering storm, is the realisation that the initially ignored AIDS epidemic is a crisis which is only just beginning…

Buy from Amazon Buy from Hive